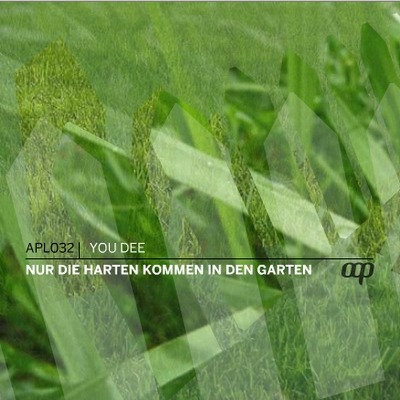 Taking a close look at the parts of a jigsaw you see a lot of details, but the overlook of the entire picture is most often lost. If you take a step back in order to take a look at the wohle picture you’ll be amazed. Not only the tracks of you dee’s „Nur die Harten kommen in den Garten“ remind of a jigsaw, but also you dee by themselves.

you dee are Sven Rieger, Peter Hansen and Stefan Wust. In 2002 they released „Adapter“ on Onitor and lately their follow-up „Through the Tulips“. The german cd/vinyllabel Onitor now offered these previously unreleased tracks to Autoplate. you dee’s aim is to break up with listening habits by creating tracks with an emotionally created working title that emerges while processing. After the track is finished they compare the result with the intended title. Generally, the working title matches their perceptions. Most songs on „Nur die Harten kommen in den Garten“ were created in this way.

The tracks are carried, guided or doused by guitar parts, as the guitar by itself sounds organic and is also much of an opposite to electronic equipment. The tracks are considered as part of a jigsaw, but each piece can remain for itself – independent of the order on the album, as they do not only play around with it’s sounds but also with their several meanings incorporated in the title. The philosophy is that the interpretation of a track is the base for another interpretation at the same time. This allows access to each song from a different point of view. Summarized, breaking fractures into listening habits are a speciality of you dee.

This can be figured already in the first track „Spätsommerwasser“ (meaning „late summer water“). The listener might expect an easy floating track, which it is somehow. But then, it’s wild beats dribble around and dance like a little waterfall. The next track „Blindgänger“ allows many interpretations. One of them would be dud – stay calm and do nothing. But in german „Blindgänger“ has a second meaning: stumbling around in darkness. This is closer to the original thoughts of you dee. Another example of this method is „So und So“ – a translation could be „this or that“ but without spaces it becomes SOUNDso – interpretable as „just sound“. The idea of this track is to concentrate on the sound, which is like a rubber ball that bounces fast up and down between the sound elements. It wants to wear away the borders between the sounds, but also wants to remain authentic. „Dichter und Lichter“ starts another game of associations between the words that allow a very free interpretation. The whole track seems to be on the one hand very sedate (symbolised by a dark dull synth that is fighting against an high attack-value) and on the other hand encouraged to free itself by the diametrical high rhythmic sound.

With „Nur die Harten kommen in den Garten“ you dee rub away any traces that are created by interpretations and styles. In fact, a jigsaw with many pieces is created, where each piece differs a lot from all the others, but on the other hand fits perfectly to them through its similar character.

Credits go to Dario for playing guitar on tracks 1,3 and 5.